Stocks meandered most of the day… with the S&P spending the first half of the day trading between 3380 and 3384… and then just after 1 pm – it pierced the 3386 closing level and was on its way to attack the all-time “intra-day” high of 3393.52 (but failed) as investors remain caught between conflicting developments on the economy and in DC… the Nasdaq – which only 4 days ago appeared to be under pressure as investors/portfolio managers, etc. took some money off the table has now once again taken control and taken the lead as valuations get stretched and stretched and stretched again… As of last night’s, close – the Nasdaq gained another 30 pts and is now up 23% ytd! As the afternoon wore on – most stocks got worn out and ended the day lower – after attempting once again to overtake the February highs… At 4 pm – the Dow gave back 80 pts, the S&P lost 7 pts and the Russell gave 3 pts.

Economic data out at 8:30 am showed us that the country is waking up and getting back to work – Initial Jobless Claims fell below 1 million – which is a positive and that did help the morning and early afternoon surge up but as talk of more disagreements in DC raged on – it appears that investors and stocks are beginning to tire… and this is NOT a surprise – we have been discussing this for weeks now – and while everyone expects a deal – it appears that that deal is not within sight… as the disarray and dysfunction continues to take place between the Dems and the WH. And now – the Senate is on vacation (really?)… so this ain’t getting done anytime soon…

Now – the issue is money for the post office – an additional $3.6 bil to cover the costs of running an election during the pandemic – and as you might expect Trump is not giving in… causing the Dems to scream that he is sabotaging the system for his political gain… depriving Americans of their fundamental right to vote – which is confusing because no one said that Americans can’t vote – they can and they can vote in person or they can vote by mail – so the issue is? Even Postmaster General Louis DeJoy telling the Dems that the postal service has the “capacity to deliver all election mail securely and on time in accordance with our delivery standards, and we will do so.”  But that is not enough to satisfy Nancy and Chucky… nor Andy Bates – a spokesman for the Biden/Harris campaign… but remember, Trump is down in the polls (at the moment) and it is an election year… and so it goes… Is anyone really surprised? Did you see his latest comments on Kamala’s eligibility?

Look – the Dems want $3 trillion in new spending, the GOP is at $1 trillion and Nancy (Pelosi) made it very clear – the two sides remain ‘miles apart’ and the Dems would only come back to the table IF the GOP promised to spend ‘significantly more than $1 trillion’. And then there is always the virus news… with 56k new cases reported yesterday – and while one side says that new cases are in decline – the other side says that’s because we are testing less – and if you test less you get ‘lesser results’. And suddenly Joey speaks up and says that if he were President, he would mandate nationwide mask wearing for at least 3 weeks by every single person in the country.

Treasury yields continued to climb – which then suggests that demand is waning as pressure mounts – the 10 yr treasury is now yielding 0.714% up from 0.51% earlier this week and remember – yields go up as prices go down… and there is a lot of room to ‘go down’. Yesterday’s $26 bil, 30 yr bond auction revealed some weakness…

Overnight in Asia – stocks managed to hold their ground and ended the week mostly higher – but cautiously higher as investors there keep their eyes on developments in DC as well as developments between the US and China. By the end of the day Japan +0.17%, Hong Kong – 0.19%, China +1.50% and the ASX +0.58%.

In Europe – markets there are all under pressure… the UK has now imposed a new 14-day quarantine on anyone coming into the country from France as virus cases appear to be spiking in that country and that is affecting the travel and leisure names… remember – it is the height of summer vacation across the continent. In addition – the ongoing drama in DC is weighing on markets as investors try to figure out what’s next? With the summer winding down and virus cases and the election winding up – many in Europe are becoming a bit more cautious over where US stocks and global stocks are headed. As of 6 am – the FTSE -2.2%, CAC 40 – 2.13%, DAX – 1.3% EUROSTOXX -1.8%, SPAIN -2.3% and ITALY -1.8%.

US futures are DOWN… Dow down 161pts, the S&P is off 16 pts, the Nasdaq is giving back 16 pts and the Russell is -12 pts. Yesterday’s reversal and the difficulty the S&P has had in piercing its February high will be at the top of the talk show agenda but it does not suggest that the battle is over by any stretch. Every time it begins to back off – it finds plenty of demand just below the surface and while we all realize that at some point – the buyers won’t be there – that’s’ not now. But it might be as we move into the fall and the election season – as the fall is usually a volatile time and the election is sure to add angst to the investing environment. Talk of a break up in tech, or an attack on energy or choking regulation in finance will be fair game in the months ahead for the Democrats and may end up putting pressure on the broader market as the many will consider a shift to value from growth…

Oil is under a bit of pressure as the market reacts to the latest news out of the International Energy Agency – who is calling for falling demand amid the ongoing pandemic… Less air travel and less travel all around… will cause demand to fall by 8.9 mil barrels/day according to them and this follows up on the OPEC forecast yesterday when they raised their forecast to a fall of 9 million barrels/day… and this is exactly when we ask – why then is OPEC raising production quotas if they think demand is falling?  I mean you can, but then you are going to put pressure on prices – which is what they don’t want – so it remains an enigma – That being said – the chart shows the long term and the short term trendlines about to collide – and if the short term pierces the long term then that will be a ‘golden cross’ – recall we discussed that earlier in the week – and that should be a bullish sign for prices in the future. The triangular pattern on the chart has trendline support at $40.39 and trendline resistance at $43.42 – and we are currently trading at $41.90 – so at some point its gonna break OUT or break DOWN… My gut says break OUT – what do you think?

Eco data today includes Advance Retail Sales of +2.1% – ex autos and gas of +1%, Industrial Production of +3% and Capacity Util of 70.3%.  These are important measures and will be watched – but if they come in as expected then they should not be a market mover so stay tuned to 8:30… and 9:15 am.

This morning the S&P is at 3373 and if futures remain weak it looks like we could open closer to 3360… support can be found in the 3330 range and if that fails then its 3275… but I am not saying we are going there right now… just laying out the landscape. Resistance is clearly at 3380 ish… Putting orders in that appear to be away from the market right now is where you will find some benefit – because if we get a short-term dislocation – you’ll be there to scoop some up. My sense is the current range remains 3,280/3380… 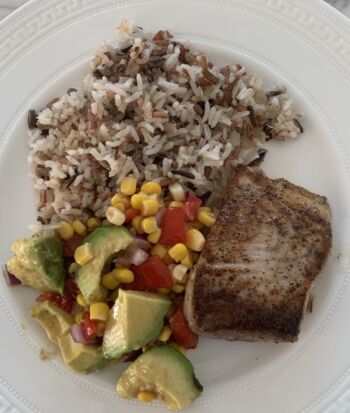 This is a great summertime dish and simple to make. I made this last night and served it with wild rice, but when my daughter makes it, she serves it with coconut rice. Either way – it’s a great dish.

First – Season the mahi mahi with s&p – set aside.

Now make the avocado salsa – Mix the diced sweet cherry tomatoes, chopped red onion, s&p, Juice from 1 lime, and ¾ c of corn – (frozen or canned is fine). (now depending on how much you are making will determine the amounts. For 4 people I would use 10-12 diced cherry tomatoes, ½ cup of diced red onion, ¾ c of corn and juice from 1 lime) – set aside.

Now – in a large skillet heat up a splash of olive oil and a dab of butter.  Sear the mahi mahi – 3 mins per side – now remove and set aside.

In the same skillet – add 6 tablespoons of butter – whisk it until it takes on the nutty brown tone – do not burn. Remove and now whisk in the juice of one lime, 1 tsp of honey, 1 large clove of chopped garlic, and s&p.

Add back the mahi mahi to this skillet and let it marinate for 2 or 3 mins.

Serve on a bed of coconut rice and top with the avocado salsa. Great summer dish – should take no longer than 30 mins… start to finish. 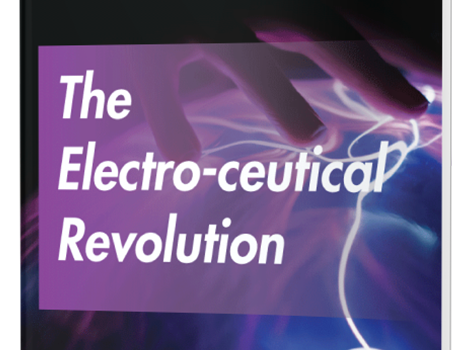 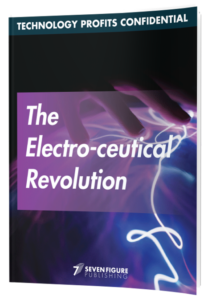